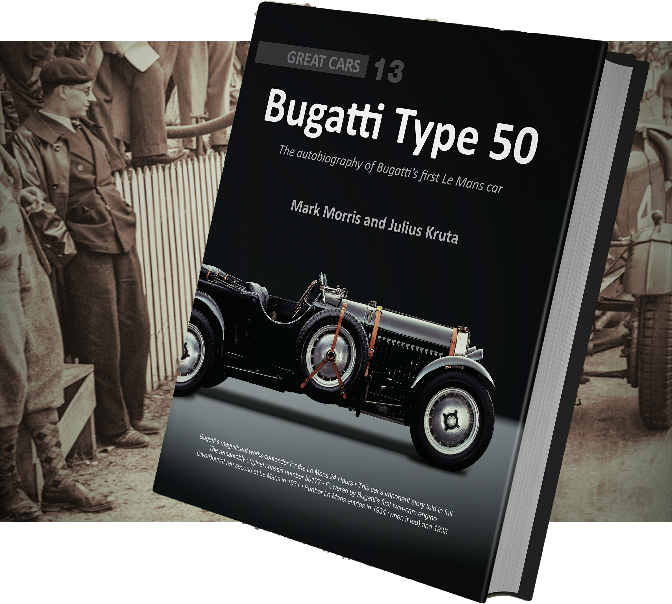 Stories of great competition cars are really about so much more besides. Great cars result from great ideas and ambitions, dedication and teamwork, rivalries and setbacks, stubbornness and bounce-backs, and great drivers too.

So now that you know Porter Press can sit you in a time machine, how far back will you choose to turn the dial? Not only to see cars, drivers and events now regarded as historically significant but also to get a privileged peek behind the scenes.

All the way to the Thirties, perhaps, to see ERA R4D, the car of Raymond Mays that epitomised British motor racing during this period. Or how about taking a look at the Alfa Romeo Monza, which raced at Brooklands and in the unlikely sounding ‘Limerick and Cork Grand Prix’, and whose drivers included Fay Taylour, the fascist sympathiser whose political views landed her in jail?

Set that dial a little differently and you could find yourself in the Fifties, looking over Fangio’s Maserati 250F, the car that defined the front-engined Formula 1 era of 1954-1960 and took part in the first and last races of that period. Staying awhile mid-century, there’s also the Jaguar C-type that Duncan Hamilton and Tony Rolt steered to victory at Le Mans in ’53, surprising rivals with the effectiveness of the car’s pioneering disc brakes. Or perhaps you’d choose to go to Le Mans three years later to see Jaguar D-type XKD 504 and gain a fascinating insight into every aspect of the D-type’s history.

Another nudge of the time machine’s dial and you’ll be in the Swinging Sixties, the decade in which our Great Cars series examines no fewer than six cars. For Formula 1 fans there’s the Lotus 18 of the Rob Walker Racing Team, the giant-slaying privateers who, with more than a little help from Stirling Moss, beat the sharknose Ferraris to win the 1961 Monaco and German Grands Prix. Or if you prefer cars that were originally designed for the road then modified for the track, there are two Jaguar Lightweight E-types: 49 FXN of 1963, the car given a distinctive aerodynamic makeover independently of Jaguar by Dr. Samir Klat, and BUY 1 of 1961, which took part in the E-type’s first ever race, and later became famous as 4 WPD. Its extraordinary driver line-up included World Champions Graham Hill, Jack Brabham and Jackie Stewart, plus other greats Brian Redman, Roy Salvadori, Dan Gurney and Jack Sears.

Still digging the Sixties, the Great Cars series also gives you a good look at two Ferraris: the finest example of the revered 250 GT Short Wheelbase, driven by Stirling Moss to victory in the Goodwood Tourist Trophy in 1960, and the 250 GTO that won the 1964 Tour de France, affirming the model’s remarkable versatility. See how the 250 GTO competed in endurance racing, hill climbing and rallying, and you could be forgiven for thinking your time-trip is hallucinatory. But the hippies are throwing away their daisy chains and the Summer of Love has passed by the time we pause to examine arguably the greatest sports racing car of the decade, the Ford GT40. Our Great Cars title looks at the example in Gulf’s iconic blue-and-orange colours, which scored two back-to-back Le Mans victories, driven by Pedro Rodriguez and Lucien Bianchi in ’68, then Jacky Ickx and Jackie Oliver in ’69.

Turn that dial forwards just one year and the Seventies start a whole new era in sports car racing – the Porsche era. And there it is, the fearsomely fast 917! The Great Cars series looks at the greatest 917 of all, the car that, in the hands of Hans Herrmann and Richard Attwood, gave Porsche its first Le Mans victory in 1970. Our book about this particular 917 also takes you to six other races, from the 1970 Brands Hatch 1,000Km to the 1971 Daytona 24 Hours.

A word of warning, though, before you settle down in your favourite armchair with a Great Cars book and start turning the pages as if turning the magic dial: all this vicarious time travelling is so enjoyable, you may not want to come back.