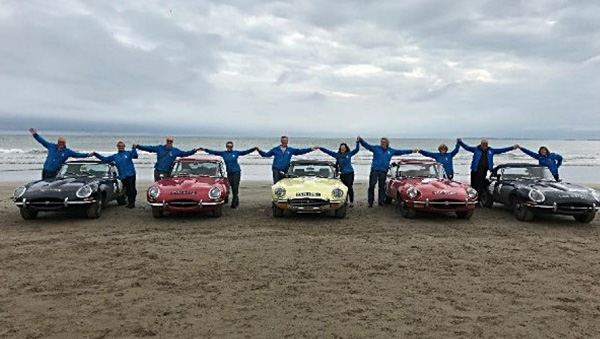 Each stage of the Drive comprised around 180 miles, with most participants signing on for one or two stages. Quite a few, on finishing their stage, signed up straight away for further days later in the Drive, and this year five crews committed to driving the whole way round.

Reaching John O’Groats in the north and Land’s End in the south, the Round Britain Coastal Drive took in Lancashire, Cumbria, Ross and Cromarty, Sutherland, Ayrshire, Inverness, Dundee and Angus, Edinburgh, Northumberland, Norfolk, Yorkshire, Essex, Sussex, Hampshire, Devon, Cornwall and Somerset before concluding in Tenby, with a final congratulatory photo-call for the five ‘all-rounders’ back at Pendine Sands.

The Drive received terrific support on the way round. SNG Barratt provided sponsorship and back-up in the form of mechanic Peter Stant, who alternated with Andy Waters from CBR Motor Bodies. Listers Jaguar of Droitwich loaned an F-Pace as back-up vehicle as well as supplying car door stickers for the whole team.

Participants were hosted in Scotland by Jimmy Stewart of Classicfabs at Ben Nevis Distillery, as well as by Tertius Threipland at Dunbeath Castle, in Essex by Abbott Racing and Woodham Mortimer, in Kent by Turner Classics and Devon by Teignmouth Town Council.

As can only be expected when a fleet of E-types roars into town, there was plenty of interest from the general public. From local E-type owners and enthusiasts casting an expert eye over the newcomers, to a couple of small boys who had the chance to sit in an E-type for a photo.

The Round Britain Coastal Drive was devised in 2016 by E-type Club co-founder Philip Porter, the renowned automotive book publisher and author, after he was successfully treated for the disease.  Philip said: “The aim was to give E-type Club members a great driving event at the same time as raising funds for Prostate Cancer UK, and awareness of the disease. It was meant to be a one-off event but proved so popular that we’re now running it for the third consecutive year. We have cars and crews coming from abroad, including the States, and even have people who have bought an E-type so they can take part.”

Angela Culhane, CEO at Prostate Cancer UK, said: “We are truly inspired by the tremendous efforts of Philip and thank him and everyone that joined him on the Round Britain Coastal Drive. “This incredible event has so far raised over £40,000 for Prostate Cancer UK, and we are delighted to hear that any funds raised through our partnership from October 1st onwards will be match-funded pound for pound by an anonymous partner. This generous offer will go towards supporting our Specialist Nurses services, the UK’s only telephone and live chat support specific to prostate cancer, at Prostate Cancer UK.

“Our Specialist Nurses are here for anyone living with or concerned about prostate cancer or prostate problems. There are over 400,000 men living with the disease in the UK, which means this service will continue to act as a lifeline for so many. By doubling the value, we are doubling the difference to the lives of men and their loved ones.”

The E-type Club was founded by Philip Porter and his wife Julie in 2004, following formation of the successful XK Club seven years earlier. The E-type Club now has members in more than 50 countries and, in addition to organising driving events, provides owners with expert advice via a 72-page monthly magazine.

Philip Porter and his 848 CRY will be at the Lancaster Insurance Classic Motor Show, supporting Prostate Cancer UK, at Birmingham’s NEC this November.